Between 1979 and 1984 Mickey won no less than six European titles, and in 1981 was appointed Chairman of the European Tour.

As European Solheim Team Captain from 1990 to 1996, Mickey led the team to victory in 1992. She went on to win the Golf Writer's Trophy in the same year. 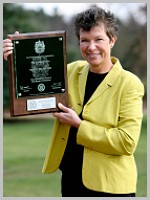 From 1986 until 2001 Mickey was Head Professional at The Warren Golf Club in Essex.

She was appointed Consulting Editor for the Lady Golfer magazine in 2002, and continues to commentate on golf for SKY TV.

Mickey was awarded PGA Master Professional Status in 2009. There are only 3 women and 24 men who have been granted it in the UK, so with this accolade Mickey joins an exclusive band.